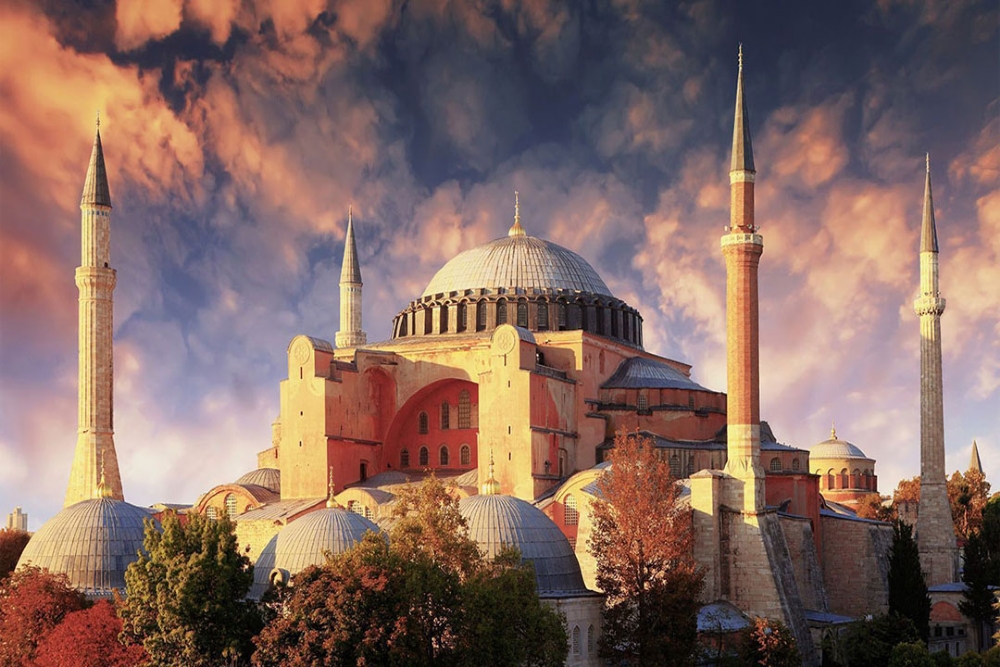 Hagia Sophia is the most renowned Byzantine cathedral and the best known Christian church in Istanbul. The church of the Divine Wisdom, the first church of Hagia Sophia was planned by Constantıne the Great, but it was built by his son and heir, Constantius . For almost a thousand years Hagia Sophia served as the cathedral of Constantinople of the Byzantine Empire.The name, Hagia Sophia, means sacred wisdom.
The first church, Hagia Sophia, was built between the years 337-361 A.D. Construction was begun during the reign of Constantius, son and successor of Constantine The Great. The church was destroyed by a fire on 20 June in the year A.D. 404.
The second church of Hagia Sophia was rebuilt by Emperor Theodosius. It was completed in the year A.D. 415. The second church was burnt down during the Nika revolt in the year A.D. 532.
The third church of Hagia Sophia was rebuilt between the years 532 and 537 by the Emperor Justinian . An earthquake damaged the structure in A.D. 558. It was rebuilt by the young Isidoros.
Hagia Sophia has been restored several times during the Byzantine and Ottoman period. On the Turkish Conquest of Istanbul. Sultan Mehmet The Conqueror entered the city on 29 May 1453. The Conqueror lead the first Friday prayers and ordered it be converted into a mosque. Four minarets of the building were placed at different times after the Conquest. The southeastern minaret was added during the reign of Sultan Mehmet II,the northeast minaret by Beyazit II and the two minarets were added by Murat III. The major restoration to the building was done during Sultan Abdulmecit's reign in 1847, by a Swiss architect Gaspar Fossatio. Mehmet the Conquerer added the mihrab and Suleyman the Magnificent donated the two gigantic candles on each side of the mihrab. The building was used as a mosque until 1934.
For almost five hundred years after the Turkish Conquest it served as the imperial mosque of Istanbul. Hagia Sophia served as a mosque during the early years of the Turkish Republic, then declared a national monument and converted into a museum by the order of Atatuk on 24 October 1934.